Nollywood actress, Dakore Akande to to her social media to shut down rumor of her crisis by posting a video of her husband, Olu, and her two daughters as they celebrate their 10th wedding anniversary today.

The multi-brand ambassador, captioned the video;

Her husband, Olu Akande, also debunked the news by posting;

“10 years just like that! Happy anniversary sweetheart! And to those who care to know, it is 10 years, not 9. Not 11; 10 beautiful, sweet, at times challenging, wonderful years. Don’t believe everything you read or hear, or see for that matter”.

Their posts, generated lots of congratulatory messages from her colleagues and well-wishers in the industry. Read few reactions blow;

“I’m so glad to see. God is always faithful and will always protect his children …happy wedding anniversary to you and my paragon @dakoreea 🙏🏻🙏🏻. God’s banner over you both”.

Well, as they often say, there is always an iota of truth in every rumour and it has been confirmed that the couple indeed had some issues but after the News broke out a few days ago, family members stepped in to resolve it for them.

A source revealed that the story was leaked to the press by one of Dakore Akande’s closest friend in the industry whom she confided in. 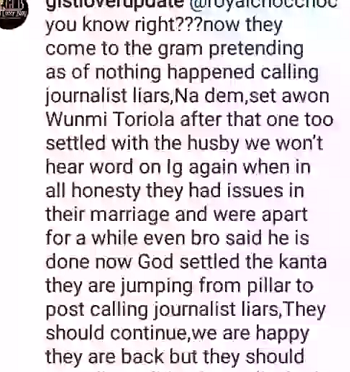 A source revealed that;

“they both had challenges and Dakore ranted to friends, who in turn leaked the News….when having marital issues, sort it out quietly, cos those you confide it will share it with other friends of theirs and it spreads on and on…..this is a lesson to everyone”.

The news of the marital crisis was rumored to be that Dakore wasn’t ready to succumb to the pressure of having a male child from her in-laws after two lovely girls.

We hope they continue to live in peace and harmony.

Tiwa Savage Speaks On Her Relationship