Nollywood Actress, Funke Akindele, Cries Out After This Happened

Popular actress, movie producer, Funke Akindele, has expedited the arrest of a circle small Security guard who broke the head of a woman with a belt. 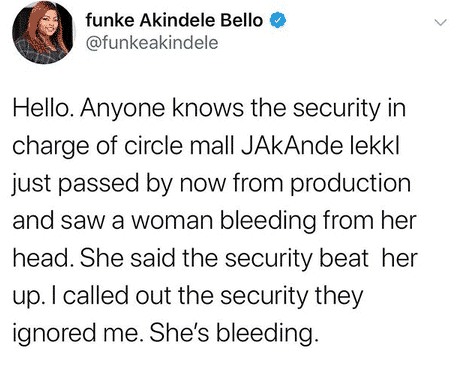 The beautiful mother of twins, Funke, took to her Instagram page, to narrate the incident thus;

“Just heading back home after shoot.Saw a woman crying and bleeding from the head, I had to stop with my driver then she said the security guys at the circle mall JAkAnde broke her head with their belt. I asked but they ignored me. So I need someone to answer to this. I think this is unfair. Why attack her. She didn’t even enter their territory”.

“That’s the woman with the head injury. I finally got the police involved. The m security guard who broke her head with his belt has been taken to JAkAnde police station. Really unfair. #circlemalllekki security!!!”