Ariana Grande has been captured in a video falling on the stage while performing wearing towering heels.

The singer was displaying her dancing and singing prowess on stage while performing at Tampa, Florida, on Sunday, November 24, when she lost her boots off her foot, loosing her balance she landed on her knees.

But the adept stage performer made a style off the fall. Ariana Grande fine-tune her fall to flow the song she was performing, the act won her an applause from the audience. 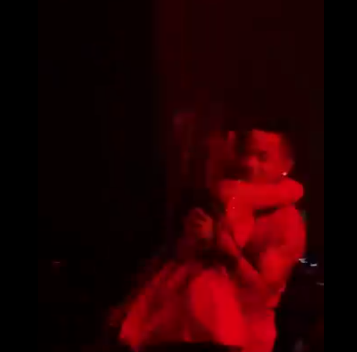 Disallowing that to affect her performance, Ariana, switched to laughing as she was assisted up by one of her male dancers who picked her up and placed her back on stage.

According to Tampa Bay Times, Ariana thanked the crowd after the incident, she remarked: “Thank you for making me feel loved when I fell earlier. I had to fall. It’s been 87 shows and I haven’t fallen yet, so it had to happen.”

Ariande later took to her Twitter handle to react to the video of her fall, she wrote: “oh my. at least i still made the button. i’m crying. things were going too well.”

SHE FELL ON BEAT I HAVE TEARS pic.twitter.com/CVTxclFcoU

Hot Photos Of Abraham Attah, The Young Boy From 'Beasts Of No Nation'