Meghan and Harry announce the name of their son, (Archie Harrison Mountbatten-Windsor)

CNB News – Hours after the world saw its first glimpse. Meghan and Harry’s new son, the newborn’s name was revealed on their official Instagram account as Archie Harrison Mountbatten-Windsor.
While there are no rules for choosing names, the British royal family likes to honor those who came before them. Bookmakers had Arthur and Edward, as well as Philip (a nod to Harry’s grandfather), among their top choices for a newborn son. But none of these made the cut.

“I don’t think anyone of us saw either of these names coming,” says Joe Little, managing editor of Majesty royal magazine.

As far as he is aware, Archie does not have any British royal connotations – and Harrison too is a totally new name for the Royal Family.

Archie means “genuine”, “bold” or “brave” – and is more popular in Britain than the US. It was originally a shortened form of Archibald but is now often used as a name on its own.

Below is the official statement made by Duke and Duchess of Sussex on Instagram.

The Duke and Duchess of Sussex are pleased to announce they have named their first born child:

This afternoon Their Royal Highnesses introduced Her Majesty The Queen to her eighth great-grandchild at Windsor Castle. The Duke of Edinburgh and The Duchess’ mother were also present for this special occasion. 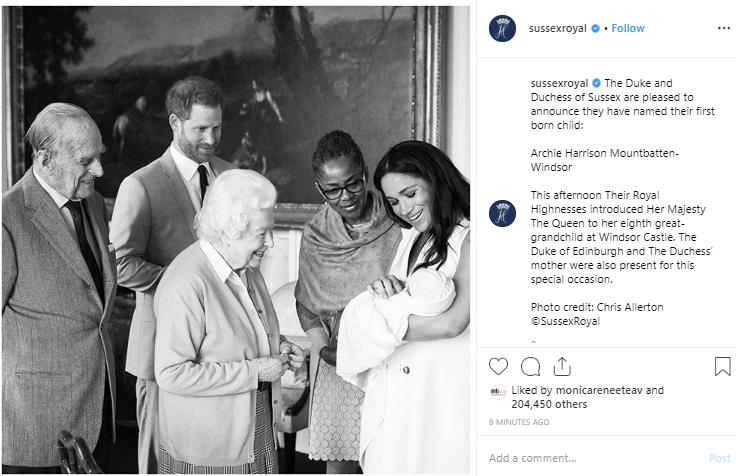 Loom: Another Ponzi scheme resurfaces after losing billions to MMM in 2017.