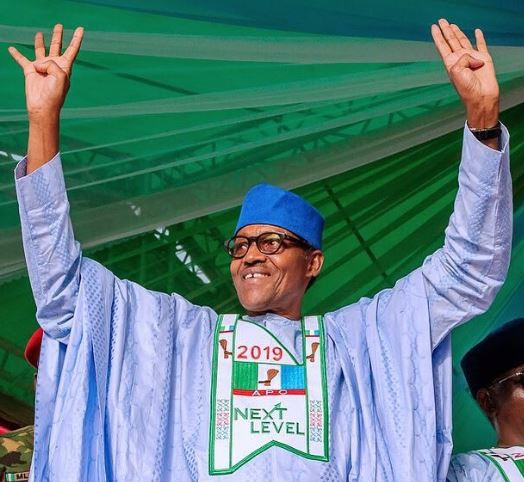 Chairman of the Independent National Electoral Commission (INEC), Professor Mahmood Yakubu, has declared Muhammadu Buhari of APC as winner of the 2019 presidential election that held on February 23rd, 2019.
President Buhari of the All Progressives Congress (APC) polled a total of 15,191,847 (56%) votes, winning in 19 of the states while Abubakar received 11,262,978 (41%) of votes and won 17 states and Abuja.
Buhari also satisfied the constitutional requirement of making 25 per cent in 34 states and the FCT.  In 2015, Buhari scored 15, 424,921 votes to beat the PDP incumbent Goodluck Jonathan who scored 12,853,162 votes.
Atiku Abubakar’s People’s Democratic Party has however rejected the results and called for fresh elections in some parts of the country where they allege over-voting and other irregularities.

“We demand the immediate and outright cancellation of presidential election results in Yobe, Zamfara, Nasarawa and Borno states as submitted by INEC presiding officers and ask for the conduct of fresh elections in these states,” PDP said. 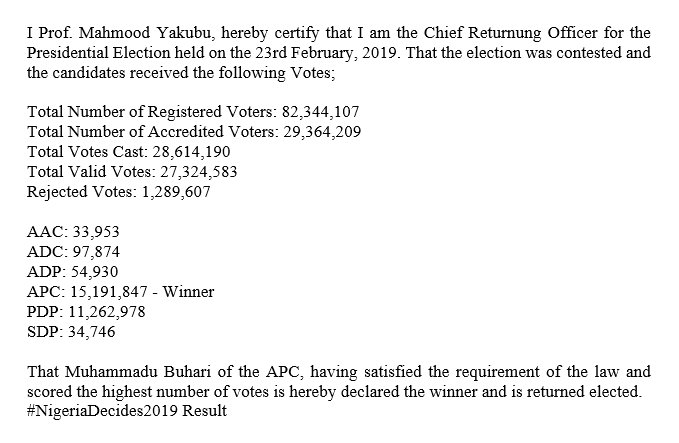 That Muhammadu Buhari of the APC, having satisfied the requirement of the law and scored the highest number of votes is hereby declared the winner and is returned elected. #NigeriaDecides2019⁠Result

5,343 people are talking about this
Twitter Ads info and privacy
At least 39 people were killed in election-related violence, according to the Situation Room, a coalition of more than 70 civic organizations that monitored the elections.
The death toll reported in the presidential vote is lower than in previous national elections. The International Crisis Group said at least 100 people were killed in violence that broke out during and after the 2015 election and Human Rights Watch reported 800 killed in the post-election violence of 2011. 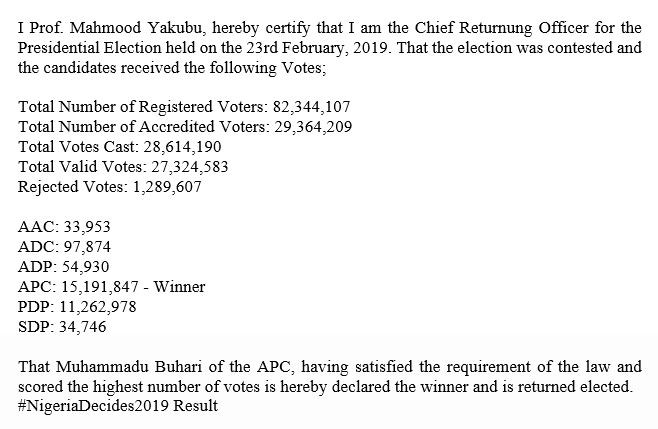 #NigeriaDecides: The Presidential results so far, Buhari of APC candidate, wining in Seven states out of 11 states announced, FCT