Buhari is an incompetent leader that rewards incompetence- Oby Ezekwesili

Buhari is an incompetent leader that rewards incompetence- Oby Ezekwesili 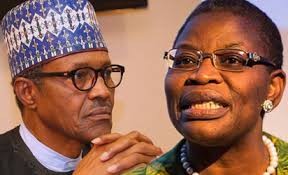 Minister of Education and presidential candidate of Allied Congress
Party of Nigeria, Oby Ezekwesili, has described President Buhari as an
incompetent leader who rewards incompetence displayed by his workers.
Ezekwesili said this when she spoke with newsmen in Calabar, Cross
Rivers state.

“He has retained the IG of police after the expiration of his tenure.
Is it for stellar performance? This is an IG of police the President
told the whole country he did not go to where he was assigned to go to
in Benue State. What the President is essentially telling us is that the
Nigerian life does not matter that much to him, otherwise he should be
very aghast at the level of killings that happened.”

Minister of Youths and Sports, Solomon Lalung steps out in nothing but his briefs as he attends a cultural carnival in Plateau