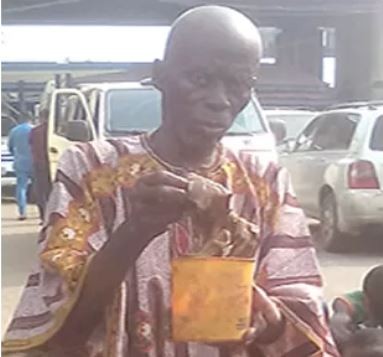 Samuel Hunsu, an 85-year-old herbalist has been arrested by the Zone 2 Police Command, Onikan, Lagos State, in possession of fresh human heart.
The suspect was said to have been arrested in Abeokuta, Ogun State and the police alleged that the old man specialized in using human parts for money making rituals. Hunsu, however, claimed that the hearts were given to him by one Abiodun, who had earlier consulted him for money ritual.

His words: “Initially, I was consulted by Abiodun. He wanted me to prepare money charms making for him. When I told him what was required for the ritual, he promised to get them. I was surprised when I saw him with fresh human heart. When Abiodun eventually brought the heart, I asked him where he got it. He said that he removed it from a thief that was killed at Ijoko area of Ogun State.
Immediately he dropped the heart, he left and promised to come back. That was how I took the heart and preserved it with dry gin and chemical under my shrine, pending when the owner will come back. I don’t know Abiodun or where he lives. He told me that he came all the way from Kwara State.”

According to police, there had been reports that two people had died in the herbalist’s shrine. A police source added: “When we asked him, he claimed those two people died while receiving treatment. He said that he buried them in his shrine, rather than release them to their families. The following day, we went with a search warrant. It was during the search of the shrine that we discovered the heart kept in a plastic and buried in the shrine. We understand the heart had been with the herbalist for two weeks, but there was no sign of decomposing.”
Share this...