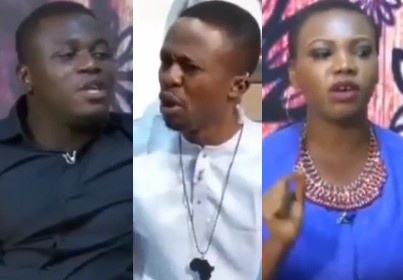 This morning , two men on TV programme stating that a female child is a sexual being has surfaced online. The topic of discussion on the show was rape and the men argued that the way females dress, aid the rape culture.
One of the male guest argued that female children no matter how young, should be dressed properly in order not to attract pedpohiles. He further stressed that female kids even as young as 5 years are sexual beings and shouldn’t be dressed in bum shorts especilally to malls.

”Sometimes you go to the mall and you see a child of 5 or 7 wearing bum short walking around and you see their parents walking behind them. Sometimes what the 5 year old or the 7 year old is wearing is revealing” one of the male participant said

When the female host, Lolo Cynthia, cut him short to educate him that a child can wear anything because a child is not a sexual being, the other male guest replied

”How is a child not a sexual being?”

Watch the video below

View this post on Instagram
Tv guests on Ravetv on the show of Lolotalk, says: 5 year old girls wearing bum shorts in the mall can be sexualing appealing. #cletusnicholasblog #blog
A post shared by Cletus Nicholas Blog (@cletusnicholasblog) on Dec 18, 2018 at 12:51am PST