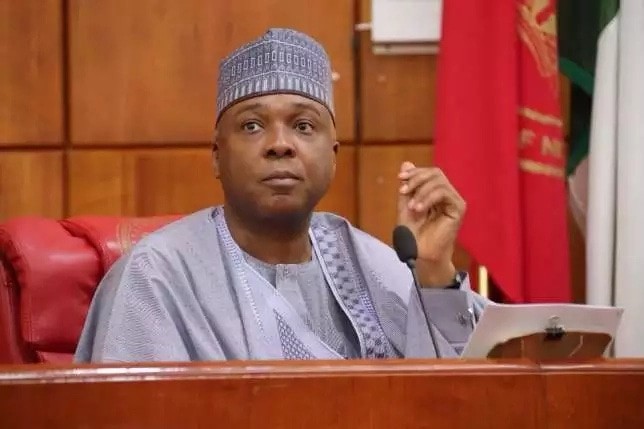 Senate President, Bukola Saraki, has called for an investigation into the mysterious death of Michael Adikwu, the principal suspect in the deadly bank robbery attacks  that took place in Offa, Kwara State, on April 5th.
Recall that the Kwara state Attorney General on Wednesday told an Ilorin High Court that the police informed his office that the principal suspect died in their custody.
Also recall that the suspects had implicated Saraki and the state governor Ahmed Abdulfatai. The suspects had in June alleged that they were political thugs of the senate president and had converted the weapons he gave to them for robbery operations.
Saraki in a statement signed by his Special Adviser on Media and Publicity, Yusuph Olaniyonu, urged the Presidency to institute a judicial inquiry into how and when the principal suspect died in police custody.
He stated that the inquiry would help to thoroughly examine and interrogate how the investigation into the robbery incident was conducted by the Police and whether the investigation followed the normal process and comply with global best practices.
Saraki added that the Police needed to confirm why it took them so long to make the disclosure about the death of the principal suspect after they categorically denied it at the time he (Saraki) disclosed the information and it was reported in the media.

“Following eventual disclosure by the Police that Michael Adikwu, the principal suspect in the deadly bank robbery attacks in Offa, Kwara State, on April 5, 2018, is dead, the President of the Senate, Dr. Abubakar Bukola Saraki, has called on the Presidency to institute a judicial inquiry into the ‘how and when’ the suspect died.”Saraki said

“It should be recalled that when we mentioned it that the principal suspect had been murdered and that investigation into the Offa robbery attack was politically motivated and targeted at implicating me and other individuals, the Police Public Relations Officer, Moshood Jimoh said: ‘Michael Adikwu is in Police custody.
“You know that he is the one that led the killing of 22 people. The firearms that were carted away, he is helping the police in the investigation to recover them. There is a state in the South-west where they kept him. I can’t mention the state. It is in one of the South-west states’.
“The fresh facts have now thrown more light into why there had been inconsistencies in the various statements by the police. The Police initially told the Attorney-General of Kwara State that the principal suspect was alive and they only later reluctantly disclosed that he died in the course of the arrest.
“How can a suspect confirmed to be in custody now be said to have died in the course of arrest? This contradiction shows a deliberate attempt to cover up something,” he said.

Never Again: APC came with change and the change gave birth to hunger, "their NEXT LEVEL" campaign policy document is a total fraud - Comr Akpa Francis