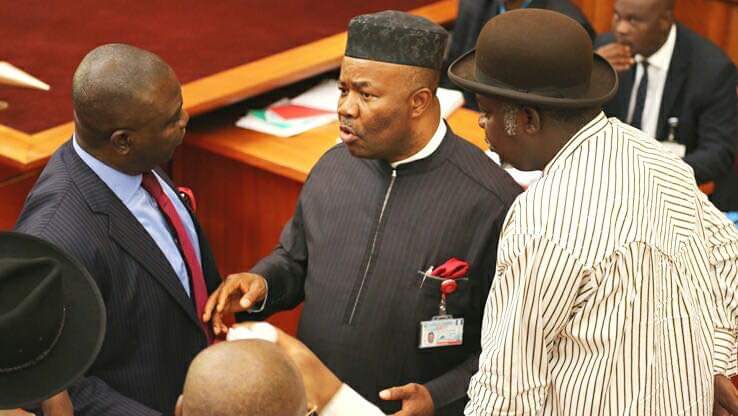 Former Minority Leader of the Senate, Senator Godswill Akpabio, has challenged other senators who have defected from one party to another to quit their leadership positions in the chamber.

Akpabio, who defected from the Peoples Democratic Party to the All Progressives Congress, challenged other defectors to imitate him with his resignation as Minority Leader after leaving the opposition party.

He gave the challenge while answering questions from journalists after the plenary on Wednesday.

The resignation challenge, however, appeared to be in a veiled reference to the President of the Senate, Bukola Saraki, who also defected from the APC to the PDP and is the only one left in the leadership of the Senate to have changed political parties.

Akpabio said, “I moved from PDP to APC, to make sure that this government works before the election. It should not be all about the election, it should be first about Nigeria. Let others also move in the national interest.

“I did not just move like that, I was a (Minority) Leader in the Senate. I resigned my position in order to show that, yes, I meant business. Let others who also have positions in the Senate who wish to also cross carpet from one political party to another also resign their positions and take a cue from what Godswill Akpabio did.”

The APC caucus, which had insisted on remaining the majority despite the defections, had asked Saraki to resign as Senate President or be impeached. The impeachment plot has however been suspended.

Akpabio stated that the sitting arrangement in the Senate chamber must be restructured to reflect the party configuration.

Young Nigerian lady thanks God for the man who disvirgined her, says: " I am now a woman"