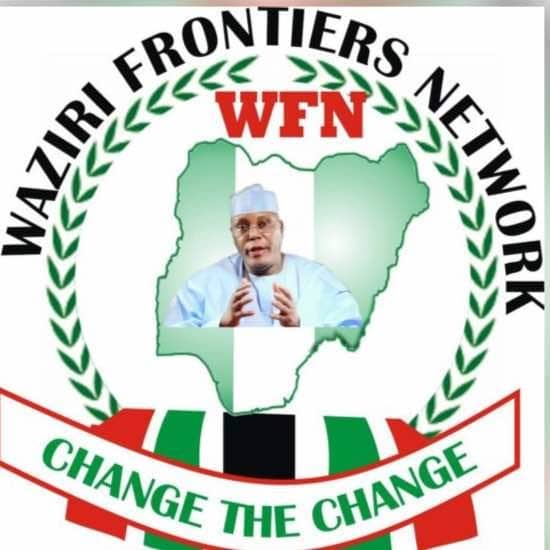 The Waziri Frontiers Network (WFN) wish to join millions of Nigerians in congratulating our principal, Alhaji Abubakar Atiku (Wazirin Adamawa) on his emergence as the flag bearer of the Peoples Democratic Party (PDP) at the just concluded Port Harcourt convention.

In the same vein, we wish to commend in very strong terms the maturity and magnanimity of other contestants for accepting defeat in a keenly and transparently conducted primaries.


Waziri Frontiers Network Director General, Engr. Dan Ohiomoba equally commend the delegates for making the right choice in the person of Abubakar Atiku whose emergence has ever since given the All Progressives Congress (APC) sleepless nights.


It would be recalled that the group while preparing for he convention, called on delegates and stakeholders of the party not to do the mistake of picking another candidate as their flag bearer other than Abubakar Atiku, and his emergence clearly shows that the wise counsel has been yielded to.


It is however worthy to note that all the other contestants were equally qualified for the position, but in the present reality, Abubakar Atiku is best situated to give an overwhelming defeat to the incumbent who has woefully failed Nigeria and Nigerians.


As a network committed to good governance, we further commended those who contested the position with Alhaji Abubakar Atiku for their resolve to join forces with the winner towards the general elections for total victory of the party, this is a commendable gesture.


The tremendous efforts of the Atiku Presidential Campaign Organization (APCO) under the able leadership of Otunba Gbenga Daniel and all APCO Support Group is also worthy of commendation and urged them to sustain the tempo until total victory is achieved in 2019.


The Chairman advisory board of the group, Chief Vincent Chukwuekezie Udobi (Onwa Ifitedunu, Ike Dunukofia) however call on members of the group to commence on aggressive grassroots campaign to ensure victory in the general election While using this opportunity to call on well meaning Nigerians haven tested the incumbent administration which has failed to give the Wazirin Adamawa the opportunity to provide qualitative governance to Nigerians.


Once again, We congratulate Abubakar Atiku and make bold to say his emergence is a well deserved one and a good omen for Nigeria and Nigerians.

#2019election: Why ATIKU is a better candidate instead of Buhari - Comr Akpa Francis