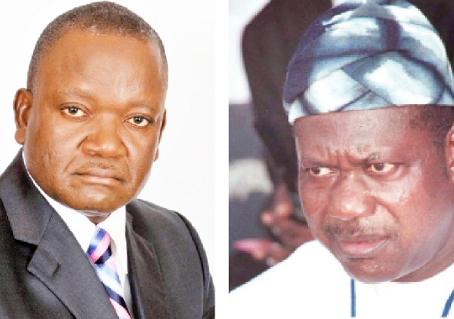 Benue state governor, Governor Samuel Ortom, has said that the type of godfatherism being practised in Lagos state, will never be practised in his state. Goveror Ortom made this remark while reacting to a comment made by his predecessor, Senator Goerge Akume, who in a recent interview said he regreted bringing Akume to government and that the governor has failed woefully in the discharge of his duties.
Akume in his interview said Governor Ortom had realised over N500 billion in revenue since Ortom came into office and has nothing to show for it.
Reacting to Akume’s comment, Governor Ortom, said he was being attacked by his predecessor because he has refused to allow Akume control him and the finances of the state. Speaking through his media aide, Tahav Agerzua, Governor Ortom said while in office between 1999 to 2007, Akume diverted N2bn from the state coffers to pursue his senatorial ambition.

“Akume’s criticism of Governor Samuel Ortom has nothing to do with performance but everything to do with Ortom’s refusal to be subservient and be subjugated to his (Akume’s) whims. It has become a trend for Nigerian godfathers to suffocate their godchildren for failing to be totally slavish to them. This is unfortunate of godfathers who see themselves as gods as it happened in Lagos State. Unfortunately for Akume, he failed to achieve the same selfish dreams for Ortom in like manner.” he said