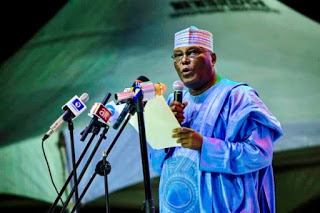 Comr Akpa Francis is a media expert, politician, a PDP member, a strong supporter of Atiku and a youths activist.


Alhaji Atiku Abubakar at the peoples democratic party (PDP) primary polled a total votes of 1,532 to contest against the incumbent president, Mohammad Buhari of All progressive Congress (APC), Donald Duke of Social Democratic party (SDP) and others in the upcoming February 2019 presidential election.


” I want to use this opportunity to appreciate all the PDP delegates who voted for the former vice president at the just concluded convention, for giving your votes to Atiku Abubakar, no doubt , the lost hope has returned to Nigerians, and this is a new dawn to our dear country”, kudos to the leadership of my great party ( PDP ) and the convention planning committee chaired by Governor Ifeanyi Okowa of Delta State for providing a free, fair and credible primary election ,he said.


No doubt, Atiku Abubakar Waziri Adamawa remains the right man to fix this country back again, he is the next president of Nigeria.


Our principal, Atiku Abubakar is a famous detribalized leader , a nationalist, a democrat,  philanthropist, a proven technocrat , successful business man and a youths friendly leader, who served as the second elected vice-president of Nigeria from 1999 to 2007, on the platform of the PDP with President Olusegun Obasanjo.


He worked in the Nigeria customs service for twenty years, rising to become the deputy director before he then retired in April 1989 to go into politics, ran for the office of governor in the Gongola state, (now Adamawa and Taraba States) in 1991.


In 1998 he was elected Governor of Adamawa state. While still Governor elect he was selected by the peoples Democratic Party (PDP) presidential candidate Olusegun Obasanjo as his running mate.


Was elected and sworn in as Nigeria’s second democratically elected vice president on 29th of May 1999 after they successful won the presidential election in February 1999.

#2019election: Why ATIKU is a better candidate instead of Buhari - Comr Akpa Francis