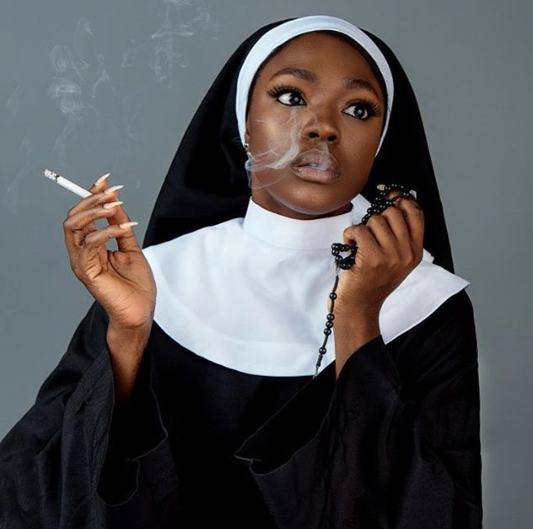 Freeze has weighed in on the controversial photo of Beverly Osu wearing a religious habit and smoking cigarette at the same time. He also used the opportunity to criticize men of God who collect tithe from poor people.
In a video shared online, the OAP says he sees nothing wrong with Beverly’s photo. He added that the problem with Christianity isn’t with the people who brought it to us but the people it was handed over to because it is now being abused. 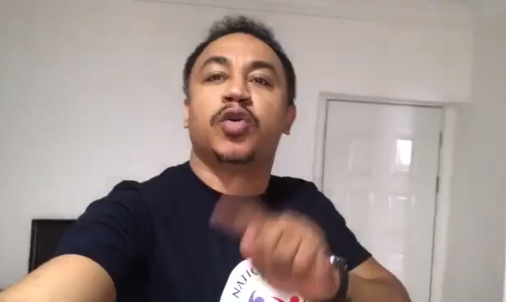 Sharing the video, he wrote:

Whoever tuned our moral compass in this country did a terrible job.
–
This Beverly Osu picture really got me thinking.
–
We are so visual in this part of the world that we seem to worry more about the branding and image of Christianity than its essence.
–
Nigeria, recalibrate your moral compass! If you think a pastor in the poverty capital of the world owning a private jet is morally right, while Beverly Osu smoking a cigarette with a rosary in her hand is wrong then you have a huuuuge problem.

In another post, he shared a photo of Beverly in the Catholic nuns gear with a rosary in one hand and cigarette in the other. A puff of smoke billows out of her mouth as she stares into space.
Though some people called out Beverly for abusing the religious wear, Freeze didn’t agree that she did anything wrong and he wrote:

I don’t understand the problem people have with this @beverly_osu post…..
–
No be cloth she wear? No be tailor sew am?
–
Was this attire invented by Jesus and his disciples or by religion?
–
If it was invented by Jesus, then I have a huge problem with it.
–
However, if it was invented by religion then I don’t understand what the fuss is….. Maybe someone should educate me.
–
By the way, I know a lot of nuns and priests who smoke. 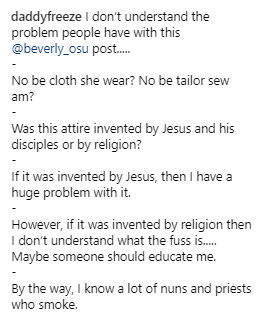 Watch Freeze address the controversy in the video below.
Share this...

U.S based Nigerian photographer slams Davido and shares screenshots of his friend's bad experience with the singer