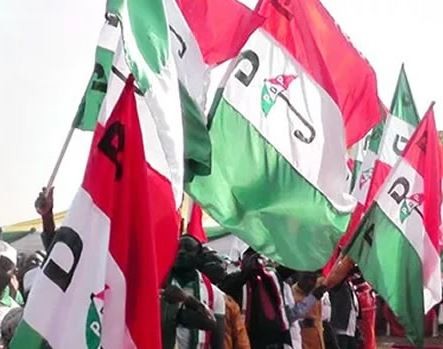 The National Working Committee (NWC) of the Peoples Democratic Party
(PDP), at the end of its meeting on Thursday, August 23, 2018, dissolved
the Kano State Executive Committee of the party with immediate effect.

A Kano State High Court presided over by Justice N S. Umar, had
restrained the national and state leadership of the People’s Democratic
Party (PDP) from tampering with the Kano state chapter of the party.
Justice Umar in an interim order dated Aug. 28, ordered both the
applicants and the respondents to maintain the status quo ante, pending
the hearing and determination of the motion on notice.

Alhaji Umar Mai Goro Rano and four others dragged the national and
Kano state leadership of the PDP before Justice Umar challenging the
plans to restructure the party’s executive committee.  The court ordered
the respondents and any other person or persons to restrain from
interfering or tampering with the tenure of the existing leadership of
PDP in Kano state.

PDP however says, ‘a Caretaker Committee has been constituted to
pilot the affairs of the state chapter of the party. Details of the
Caretaker Committee would be made public in due course. All members of
the party in Kano state and across the nation should be guided
accordingly’.

Comedian Seyilaw identifies suspected fraudster,says " He is the son of a pastor"