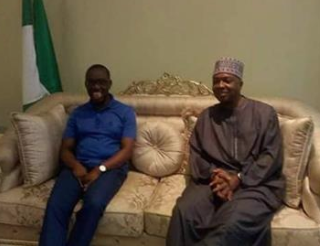 Senate President Bukola Saraki says he is not losing sleep over plots and calls for his impeachment. After his defection on August 1st, the APC has called for his immediate resignation. The party chairman, Adams Oshiomole, has said that it is either Saraki resigns honorably or he will be impeached.
Speaking in Delta state today where he went to pay a courtesy visit to the state governor, Ifeanyi Okowa, Saraki sai he is in no way losing sleep over the plots to impeach him.

“I am not losing any sleep about impeachment. We have a country that a lot of Nigerians believe there must be rule of law and those who are talking about impeachment are engaging in cheap blackmail.  I am not concerned about that” he said

The purpose of the visit was not clear but Saraki who dumped the All Progressives Congress (APC) for the Peoples Democratic Party (PDP), has declared interest in the presidency.
Share this...