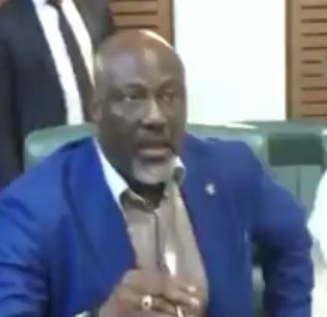 Yesterday Dino Melaye joined senate president, Bukola Saraki to pay a courtesy visit to Akwa  Ibom state governor, Emmanuel Udom.
During the visit, Dino who is know for his singing skills dropped  another hit song. In the song, he trolled the former governor of the state now Senator, Godswill Akpabio, who recently defected from PDP to APC.
Watch a video of Dino singing below

Sen. @dinomelaye Is here with and hit single for governor udom of akwa ibom. #goodmusic #events #cletusnicholasblog
A post shared by Cletus Nicholas Blog (@cletusnicholasblog) on Aug 18, 2018 at 3:21am PDT