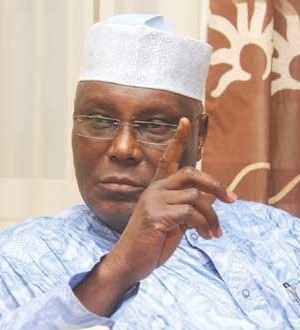 Former Vice President and a hopefull presidential Candidate , Atiku Abubakar, has condemned this morning’s invasion of the National Assembly complex by masked DSS officials.
In a statement released on his social media handle, Atiku called on President Buhari and acting president Yemi Osinbajo, to stop hiding behind one finger and act now to stop the madness going on in the National Assembly. Read his statement below:

The attention of former Vice President of Nigeria, Atiku Abubakar has been drawn to an illegal and undemocratic attempt by fascist forces to break into the National Assembly for the purpose of furthering the agenda to force a change in the Nigerian Senate’s leadership.
Atiku Abubakar completely condemns this atrocity and calls on all those involved to put Nigeria first and abandon this madness.
The Constitution of the Federal Republic of Nigeria, as amended, guarantees both the independence of the Legislature and Separation of Powers. Nigeria is a democracy not a military dictatorship and we the people will never return to tyranny.
Atiku Abubakar calls on President Muhammadu Buhari and acting President Yemi Osinbajo to stop hiding behind one finger and live up to their responsibility of upholding the constitution and law and order, which they swore to on May 29, 2015.
“We warned that if what occurred in Benue last week was not checked on time, it would escalate to the federal level. Today we are seeing that warning in play.”
The acting President, being himself a Professor of Law, ought to know that setting such a precedent is an invitation to anarchy.
There are better uses for our security forces at this time than to lay siege to our citadels of democracy. Our people are languishing in the midst of unprecedented insecurity and nationwide killings. To thus deploy our security forces in this present manner whilst Nigerians face these challenges is an abdication of responsibility to say the least.
All Nigerians should be watchful and mobilised to defend democracy. We must remember that ‘eternal vigilance is the price of liberty’.