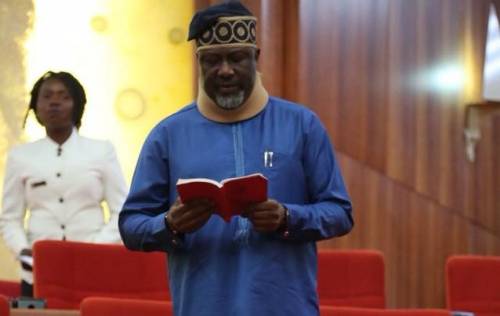 According to a post by Sahara Reporters claims that Senator Dino Melaye was never arrested.
Read the post below:

Contrary to those claims, Melaye’s relatives and many senators have told SaharaReporters that he was never kidnapped but only staged a walk into a bush to avoid being charged before a Kogi High Court, SR reports.

Although Dino Melaye, the senator representing Kogi West, resurfaced on Friday to claim he “spent 11 hours in the wilderness”, SR is confirming that he was never kidnapped.

Melaye was scheduled to be arraigned on Thursday before the Magistrate court in Abuja for alleged gunrunning, but the trial could not hold due to the claims by Senator Ben Bruce, quoting Melaye’s brother, that he had been abducted by unknown gunmen.

On Friday, he wrote on Twitter: “I thank God once again for escaping another dangerous attack. I also thank Nigerians for their prayers and show of Love. Spent 11 hours in the wilderness traumatized but God preserved me. God is the best and in whom ONLY I trust. They will continue to try. WE SHALL OVERCOME!!!”

Contrary to those claims, SR claims that Melaye’s relatives and many senators have revealed that he was never kidnapped but only staged a walk into a bush to avoid being charged before a Kogi High Court.

See photos: Regina Askia and her daughter meet with Ooni Of Ife in US