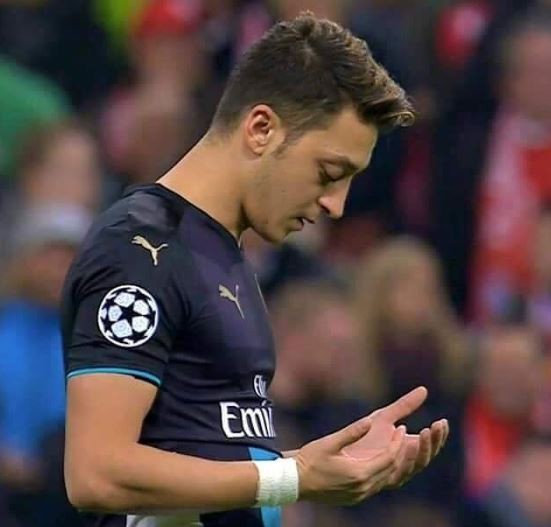 Mesut Ozil has confirmed that he is retiring from international football with immediate effect following the “treatment he received from the DFB.”
The Arsenal attacker claims that the way he has been treated by the German football association makes him “no longer want to wear the German national team shirt.”
Ozil announced the decision in the third part of a lengthy statement released on his Twitter account, with the first part explaining the reasoning behind his controversial photograph with Turkey president Recep Erdogan and the second update criticising how the media and sponsors reacted to the incident.
DFB president Reinhard Grindel was the focus of the third and final part of the statement, as Ozil hit out at the official, claiming: “I will no longer stand for being a scapegoat for his incompetence and inability to do his job properly.”
Following Germany’s disastrous World Cup performance, where they failed to get out of their groups and lost to both Mexico and South Korea, Ozil was heavily criticised by the media and by the DFB, with Grindel even urging the midfielder to make a public statement on his meeting with Erdogan, also questioning his credentials as an international player following the incident.

Ozil detailed how Grindel attempted to benefit from the fall-out of the player’s meeting with Erdogan, aiming to use it as a means to express his own political views and undermine Ozil in the process. He also accused the DFB president of racism, stating that “I am German when we win, but I am an immigrant when we lose.”

As well as Grindel, the 29-year-old highlighted the actions of politician Bernd Holzhauer who called Ozil a “goat-f***er” and Chief of German Theatre Werner Steer who wished for the footballer to “p*** back to Anatolia.”
The way Ozil has been treated by German media, politicians and especially the DFB has caused him to make the “difficult decision” to announce his international retirement, saying that: “I now feel unwanted and think that what I have achieved since my international debut in 2009 has been forgotten.”
In those nine years, Ozil has played 92 times for his country, scoring 23 goals. He was part of the side that lifted the 2014 World Cup and also helped Germany to the semi-finals of the 2012 and 2016 European Championships.
Ozil also went with Germany to the 2010 and 2018 World Cups and was named national team player of the year five times.
Share this...

Cossy Orjiakor shares video of herself twerking in her bikini, as her massive boobs seen almost falling

'Never, ever threaten the US again or you will suffer consequences the likes of which few have ever suffered' - Trump warns Iranian President