FG to probe case of stranded Nigerians in Russia

FG to probe case of stranded Nigerians in Russia 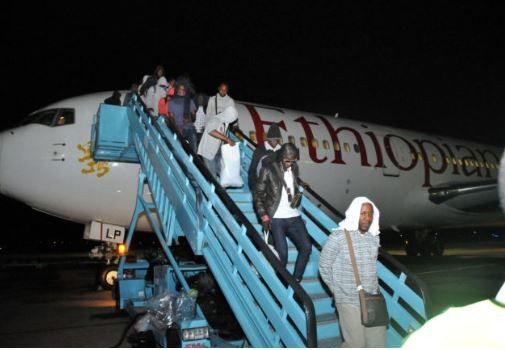 Geoffrey Onyeama, Minister of Foreign Affairs revealed the plan to probe the incident at the Nnamdi Azikiwe International Airport, Abuja where he received the returnees. The stranded Nigerians, who besieged the nation’s embassy in Moscow on July 12, were safely returned to the country following a directive by President Muhammadu Buhari.
Onyeama said after a discussion with the Director General of National Agency for the Prohibition of Trafficking in Persons (NAPTIP), Julie Okah–Donli, it was clear that there were possible cases of human trafficking among the returnees.

“I have spoken to the DG of NAPTIP and she had also indicated that they had sounded the alarm bells for these young children not to leave the country, that it had all the hallmarks of trafficking and irregular migration,” he said.

The minister insisted that some of them, among whom was a nursing mother, were quite too young to have travelled to Russia by themselves solely for the purpose of the World Cup tournament. He added that an investigation would also be launched into an allegation that some travel agents cancelled the return tickets of the football fans without informing them, leaving them stranded in the European country.
Share this...