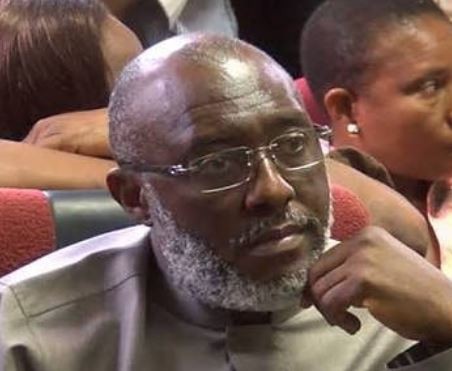 Olisa Metuh, a former spokesperson of the Peoples Democratic Party, PDP, took to the dock on July 6, 2018 as he continued with his defence in the ongoing N400 million fraud trial before Justice Okon Abang of the Federal High Court, Abuja.
At the proceeding, Metuh attempted to enter the dock in preparation to being led in evidence by his counsel, Onyeachi Ikpeazu, SAN,  but was stopped by the judge, who ordered him to testify from where he was seated in the courtroom.
Under examination, Metuh briefly told the court about himself saying “my name is Olisa Metuh. I live in Prince and Princess Estate. I am a legal practioner, a business executive, politician and real estate developer”.
The matter was thereafter adjourned to October 22, 2018. .
After the matter was adjourned, Ikpeazu made an oral application to the court, seeking the leave of the court to allow Metuh travel to the United Kingdom for his daughter’s graduation, but Justice Abang reminded him that “this is a court of record”.
“There is no formal application before me. There should have been one, attached with an affidavit and served to the prosecution before the court will hear both sides and use its discretion,” the trial judge held.
Share this...

At the end of a tortuous journey of 1018 days, I have been vindicated - Bukola Saraki