See video: Catholics and protestants fight for right to preach in a bus in Anambra state

See video: Catholics and protestants fight for right to preach in a bus in Anambra state 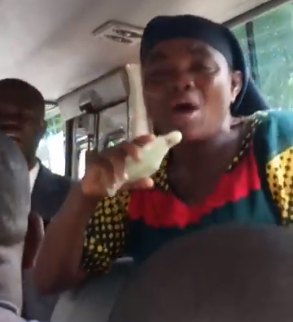 A very embarrassing video trending online shows two Christians fighting for who will preach in a bus in Anambra state.
The spiritual warfare happened on Tuesday, July 3, in a bus that took off from Awka.
According to reports, the man belongs to the Protestant denomination while the woman belongs to the Catholic denomination.
Juliet Ifediba who narrated the incident and shared the video said the man stood up to preach first but the woman stood almost immediately to begin praying the Rosary. This led to a fight for who will be allowed to preach.
At some point in the video, the woman is seen crying as she held up a statue of Mary and a Rosary, while the man is seen casting out every distraction by the power of the “Holy Spirit”. This led to so much noise in the bus as both of them screamed at the top of their voices to be heard.
Sharing videos of the altercation, Ifediba wrote:

Something happened in this bus on Tuesday
according to my mum who entered this bus in awka. She said “look at the man in black suit is a pastor. As the pastor stood up to pray, there is another elderly woman standing up.”.. And from what my my mum learnt the woman is a Roman Catholic. So immediately the woman interrupted the pastors prayer and started with her’s (which is rosary)she prayed the rosary for more than 30mins.
Meanwhile the pastor was waiting. But all of a sudden a man ask the woman to cut the prayer short so that the pastor can start with a general prayer which everyone knows(cos not all passengers are catholic) others supported the man. But the woman paid deaf ears and wasn’t ready to stop.. She said. “we hv 21decades to pray” only the few catholic passengers understood and they was like, “madam PLS cut it short let’s pray a general prayer.. Immidiately the woman started shouting on Top of her voices as if someone is dragging rosary with her.,, then the pastor who was waiting patiently found out that the intention of the woman wasn’t to pray a peaceful prayers rather to bring a denominational fight….started a praise song through the as that video is a evidence that shows that 98% of the occupants of the bus join the pastor in praises.. The woman was left alone with hers..
“You won’t believe what happened”. Mum said. “The woman brought out a status of mary and began to shout sooooooooo loud. Creating a scene”. It was somehow funny to me. Her prayers goes thus… Mary Mary Mary Mary Mary.. She was shouting Mary.. And singing all rosary hymn… All of a sudden war of prayer broke out passengers started casting out any spirit of distractions in the woman.. My mom made a comment heard in the background of the video. “God there is war in ur temple cos of ur name..
But mine is….. The woman wasnt dragging God with the pastor rather she was praying to mary(watch the video).
From the video I don’t understand.. It seems the woman is crying too…. 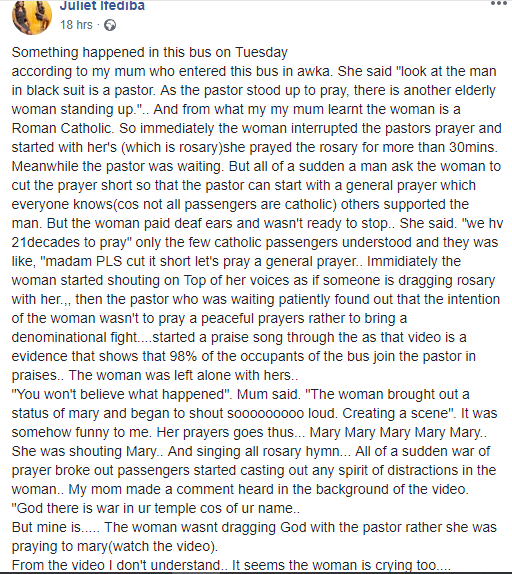 ''There is no faction in our party'' APC says