‘I support President Buhari because he is fighting the cabal’ – Fuji music legend, Kwam 1

‘I support President Buhari because he is fighting the cabal’ – Fuji music legend, Kwam 1 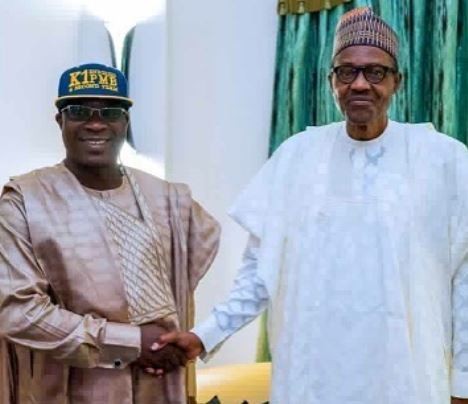 Fuji musician, Wasiu Ayinde otherwise called K1 de Ultimate, has said he is supporting President Buhari’s re-election bid because he is fighting a group of Nigerians he described as ‘cabal’.
K1 who visited the President in Abuja last week said, “I support President Buhari and want to carry it on my head because this is the fist time we see a person coming twice to fight the cabal that refuses to let this country move forward’.
‘The cabal that refuses to let the people of this nation making good of the nation for themselves and for other generations to come. For the first time we have someone who looks the cabal in the face and tells them enough is enough. He had tried this when he first came as a military ruler” he said
He added that, “I supported Asiwaju too when he was in government. It was based on his focus and approach. I have asked myself why I m going in this direction. The answer is that any time I am not at shows or in a studio, and I interact with friends, we always discuss the development and happenings in society. One thing will lead to the other and I felt, why not seek an opportunity to push these discussions to the main political space, to the people who make decisions for all of us? And I discovered that when you give political office holders good advice, they do listen’.
Share this...