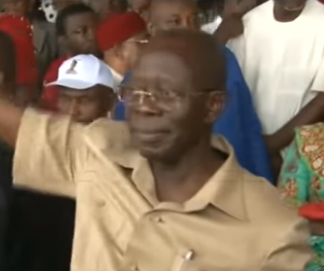 APC National Chairman, Adams Oshiomole, says the party will not stop blaming PDP for its failure during its 16 years of governance in Nigeria.
Oshiomole, who was one of the speakers at the APC South East Mega rally for Buhari in Owerri, Imo State capital on Tuesday, blamed the PDP for failing in establishing projects in the South East during their administration.

“Those who are writing letters now. Those who have become unelected advisers. They governed as absolute rulers for almost three years. They came back eight years, what did they do about second Niger bridge? And then he wanted to take us to Mugabe where there is no end of tenure. Those who have spoken before me have spoken concerning all the initiatives and infrastructural projects that are going on in this part of the country. This is not to say everything is now fine. It is a journey. We cannot fix in three years, what PDP didn’t do in sixteen years. What they didn’t fix in 16 years, they said we should have fixed it in three years. And then they said we should stop the blame game” he said

See video: Davido wants Apple to increase the security measures of iphones after girlfriend Chioma accessed his phone without his permission

''If you criticize Buhari’s government in Wuse market, you may not come out alive'' Senator Ndume says