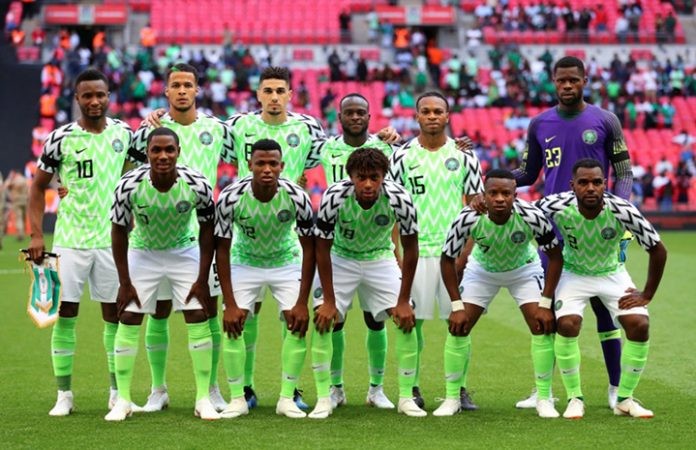 The Federal Government has increased the winning bonus of super eagles by $5,000 as a means of motivating them to win their remaining two group matches at the ongoing FIFA World Cup in Russia.
With this increase, each player will now get $15,000 winning bonus per game against initial $10,000 per game agreed with the players before the tournament kicked off in Russia on Thursday.
The increase in Bonus comes after their loss to Croatia in the first leg of their matches last Saturday.
The Super Eagles will play their next two group games against Iceland and Argentina. Nigeria will play Iceland who drew 1-1 with Argentina on Saturday June 22 before playing Argentina in their last group game on June 26.
Making the increase in the winning bonus known, the Minister of Sports, Solomon Dalung said

“It is unfortunate that we did not win, which would have served as a morale booster at the group stage, but we will not lose hope. The Federal Government is doing its best to ensure that the Super Eagles excel in Russia. Even President Muhammadu Buhari took time out to motivate the players yesterday and to assure them of his unflinching support for the team. I personally added $5,000 to their winning bonus to motivate the team, but we must still keep our hopes alive because this is just the beginning. I urge the players to remain focused while the technical department will have to put heads together with the coach to salvage our next two matches against Iceland and Argentina. If we win our next matches against Iceland and Argentina, then we can qualify from the group.”

He called on Nigerians to continue to support the team

”The Super Eagles are a work in progress. It’s a very young team and we are nurturing them for greater exploits, not only for now but also for the future. We are not giving any excuses but we must continue to rally round our team, irrespective of the result recorded on Saturday. I appeal to Nigerians to rally behind the team and pray for them ahead of their next game against Iceland. I strongly believe that despite the disappointing start, the Super Eagles will come out strong from the group,” he said