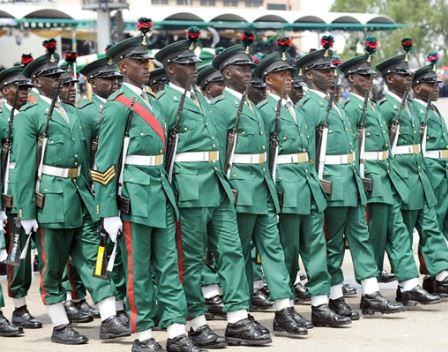 Air Vice Marshal Austine Jekenu, Commandant, Nigerian Armed Forces Resettlement Centre (NAFRC) has confirmed that a total of 320 military personnel will retire from the armed forces next week.
He told newsmen at the centre in Oshodi, Lagos today that the retiring military men were drawn from the Army, the Air Force and the Navy. “A total of 320 servicemen comprising of 262 from the Nigerian Army, 44 from the Nigerian Navy and 14 from the Nigerian Air Force would be graduating from the NAFRC,’’ he said.
Jekenu said that the retiring servicemen went through months of intensive training on skills acquisition and entrepreneurship at NAFRC. He said the training was to prepare the retirees for life after military service.
According to him, the centre has the mandate to provide necessary training geared towards preparing retiring servicemen for reintegration into civil life. He said that the initiative was to enable the beneficiaries adjust and appropriately blend with the peculiarities of retirement and contribute actively to national economy as worthy civilians.
He urged all the retiring servicemen to positively contribute to boost national economy in whatever business they engaged in.  “The centre graduates 2 courses annually and it is on record that we have trained over 41, 000 ex-servicemen of the Nigerian Armed Forces since its inception,” he said. The commandant, who said that the passing out ceremony for the course participants would hold on June 22, added that the Minister for Defence, Mansur Dan Ali, would grace the occasion.
Share this...

'Once i sleep with a guy, his destiny becomes mine, and he’ll be wretched for the rest of his life' - Slay Queen brags on facebook