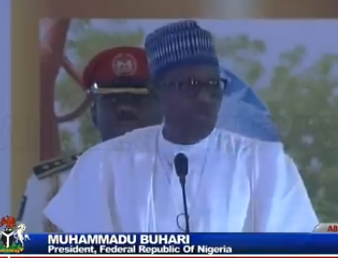 President Buhari today tendered an apology on behalf of the Nation to the family of late MKO Abiola over the annulment of the June 12th 1993 election which he presumably won.
At the investiture of the June 12 democracy day and conferment of the GCFR title posthumously to the late politician, late Gani Fawehinmi and Ambassador Babagana Kingibe, President Buhari said;

”On behalf of the Federal government, I tender the nation’s apology to the family of late MKO Abiola who got the highest votes and to those that lost their loved ones in the course for the June 12 struggle”.

See photo: President Buhari bends down to help Gani Fawehinmi's wife pick up an item that fell during the June 12 honours