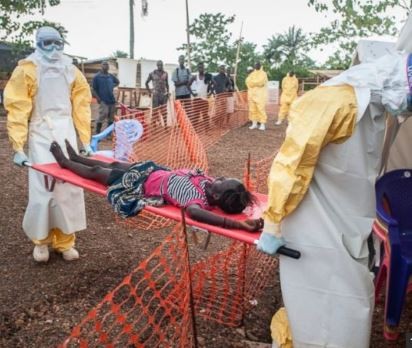 Congo’s minister of health has just announced the first death since a new Ebola outbreak was declared in the country, as well as nine other cases of people sickened by a hemorrhagic fever that is suspected as Ebola.
Health officials declared an Ebola outbreak in the country’s northwest on Tuesday after lab tests confirmed the deadly virus in two cases from the town of Bikoro in the Equateur province.
Officials from the World Health Organization and other international health agencies are in the area to help contain the outbreak’s spread. Seven people with a hemorrhagic fever, including two confirmed cases of Ebola, were hospitalized in Bikoro as of Thursday, according to Health Minister Oly Ilunga.
The death happened overnight at a hospital in nearby Ikoko Impenge hospital that also reported four new suspected cases of Ebola, Ilunga said.  Ilunga told The Associated Press that the patient who died was a nurse. Three other nurses also were being treated for a hemorrhagic fever, he said. The minister clarified with The Associated Press that testing still must be done in nine cases, and equipment to conduct rapid testing on the patients has been dispatched.  “This situation worries us and requires a very immediate and energetic response,” he said at a news conference.
The two Ebola cases were confirmed as the Zaire strain after officials in the capital, Kinshasa, were alerted early this month to the deaths of 17 people from a hemorrhagic fever and traveled to the Bikoro area to perform tests. The deaths occurred over a period of time and Ebola, which is not the only virus responsible for hemorrhagic fevers, has not been confirmed as the cause in any of the 17 cases, Ilunga said.
Bikoro Hospital director Dr. Serge Ngalebato told The Associated Press earlier Thursday that nurses at the hospital were among the five suspected Ebola cases there.  “We have isolated the patients,” Ngalebato said. “There are no deaths yet, but all of the sick are presenting signs of fever, diarrhea, vomiting, abdominal pain and intense fatigue.” This is the ninth Ebola outbreak in Congo since 1976, when the deadly disease was first identified.
Ebola occasionally jumps to humans from animals, including bats and monkeys. There is no specific treatment for Ebola, which is spread through the bodily fluids of people exhibiting symptoms. Without preventive measures, the virus can spread quickly between people and is fatal in up to 90 percent of cases. The director of the National Institute of Biological and Bacterial Research, Dr. Jean Jacques Muyembe, said Wednesday that health experts should be able to quickly contain this outbreak because the area is so remote.
The cases could be linked to a policeman in the Bikoro health zone who presented symptoms of hemorrhagic fever and died in December, Muyembe said. His mother and 10 others then showed similar symptoms. None of the Ebola outbreaks in Congo have been connected to the massive outbreak in Guinea, Liberia and Sierra Leone in West Africa that began in 2014 and left more than 11,300 dead.
Share this...