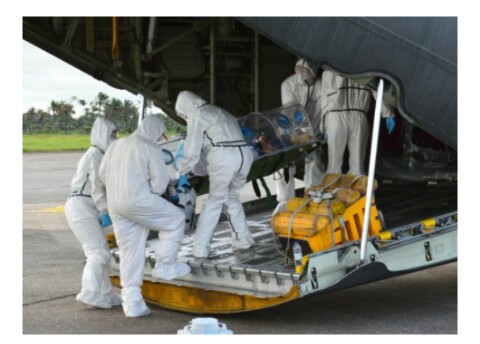 The Nigeria Immigration Service (NIS) is taking swift action to ensure that Ebola does not enter the country following a fresh outbreak in the Democratic Republic of Congo.
NIS spokesperson Sunday James told BBC that immigration officials would tighten vigilance at airports and make more use of thermometers to screen passengers.
‘We are sending a signal to all entry points in the country. The intention is to ensure that any suspected case can be promptly handed over to health officials at the airports. This is a matter which everybody must be concerned about. All hands must be on deck” he said.
During the 2014 outbreak in West Africa, more than 11,000 people died mainly in Guinea, Liberia and Sierra Leone. Ebola also spread to Nigeria when Patrick Sawyer, who was infected with the virus, flew into the country from Liberia.
Nigeria’s response to the crisis was generally praised. Eight people died, including Dr Stella Ameyo Adadevo, who first attended to Mr Sawyer and helped to ensure a more devastating outbreak was avoided in Nigeria.
Share this...