Cardinal Dolan says: Rihanna borrowed one of his Miters for Met Gala

Cardinal Dolan says: Rihanna borrowed one of his Miters for Met Gala 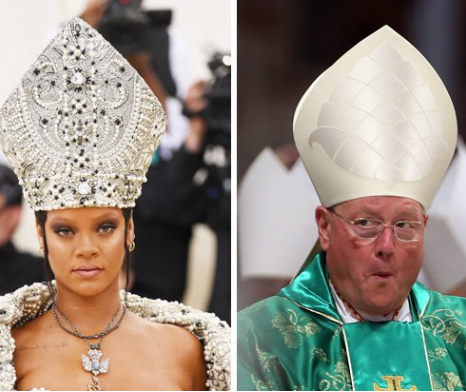 While Piers Morgan and some members of the public are criticizing the Met Gala’s Catholic theme (Heavenly Bodies: Fashion and the Catholic Imagination), which they say is a “mockery” of the Catholic church, a Catholic church leader has made light of the situation and says he sees nothing wrong with it.
Cardinal Timothy Dolan, the head of New York’s Roman Catholic diocese, was present at Monday night’s $30,000-a-head Met Gala. He attended both the opening of the exhibition and the Met Gala.
Rihanna stood out at the Met Gala in her bejeweled papal-looking cap and Cardinal Dolan jokes that the miter Riri wore was a loan from him.
Cardinal Dolan said in a Tuesday interview on SiriusXM’s The Catholic Channel: “The news said she was wearing a tiara.”
Cardinal Dolan then went on to explain that it wasn’t a Tiara, but his miter, which is worn by bishops and cardinal on formal liturgical occasions.
He added: “She gave it back to me this morning. … She was very gracious.”
Dolan agreed that the miter was a good match for Rihanna’s beaded white corset dress with matching jacket and clutch.
He joked: “I was teasing my auxiliary bishops, who were teasing me about Rihanna and I said, ‘Hey, you guys should not complain because she’s volunteered to do some confirmations’.” 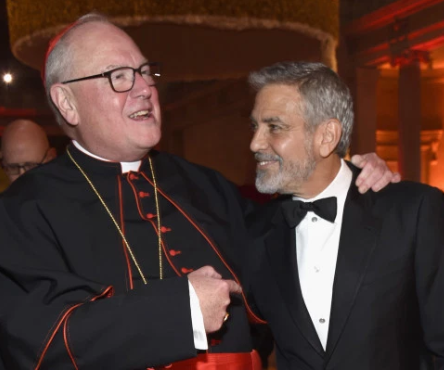 Cardinal Dolan and Goerge Clooney at the Met Ball
He continues: “There were some aspects that looked like kind of a masquerade party, a Halloween party. I didn’t really see anything sacrilegious, I may have seen some things in poor taste, but I didn’t detect anybody out to offend the church.”

He added: “A number of people came up and spoke about their Catholic upbringing and things they remembered and it was a powerful evening.”
Dolan admitted he’s no fashion expert and said he wasn’t at the event for the fashion.
He said: “You think I’d look like this if I was interested in fashion? You think I wouldn’t lose 80 pounds? You’re talking about a JCPenney’s Big & Tall man — that’s where get my fashion, OK?
“You know I wasn’t in there for the fashion, the glitter.” 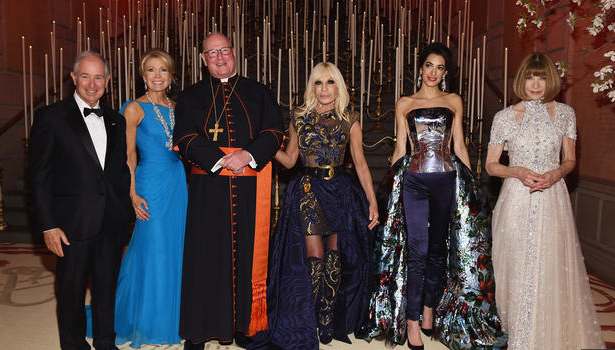 Dolan went to the Met Gala for the displays of actual Catholic relics on loan from the Vatican. The Met Gala theme this year was based on a new exhibit of Vatican-loaned artwork and vestments called “Heavenly Bodies”. He admitted he was a “tad apprehensive” about attending the Met Ball, but ball host and Vogue editor Anna Wintour had assured him that organizers would rein in the out-there fashion choices of previous years.
At the exhibition, he said: “What’s the Church doing here? What is the Cardinal-Archbishop of New York doing here? Well, because the Church and ‘the Catholic imagination,’ are all about truth, goodness, and beauty…”
Share this...

IG of Police, Ibrahim Idris fails to appear before Senate for the 3rd time!