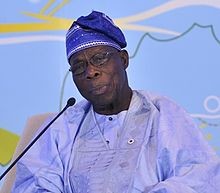 Former President Olusegun Obasanjo believes Nigerians from the South East region will benefit the most if President Buhari is voted out of office in 2019. Obasanjo who has made it known he is not in support of President Buhari’s re-election bid, yesterday said voting President Buhari out come 2019 is in the best interest of the Igbos. He made this known  when he spoke at a meeting of the Coalition of Nigerian Movement  CNM in Awka, Anambra State,
Speaking through the South East coordinator of CNM, Dr. Okey Nwosu, the ex-president asked the people of the zone not to believe the lie being sold that the region will produce the next president come 2023, that is after Presidnet Buhari must have done a second term.

“The meeting is a wake-up call for Nd’Igbo to dump APC and collaborate with CNM, which is the best alternative for their rescue from poverty, hunger, recklessness and ethnic cleansing in the hands of the Hausa/Fulani marauders. Every Nigerian leader is very much embarrassed with the state of the nation where people are attacked, killed, raped and made refuges in their own homes. Political leaders must advocate action against these senseless killings and seek how to design a new democratic action plan to ensure we take care of this conundrum democratically, and say, ‘Enough is enough.’ If unchecked, these unethical activities will lead to the destruction of the country. It does not augur well for Nigeria’s development.” he said

Between Bambam and Ceec, who rocked the monochrome look (See photos)