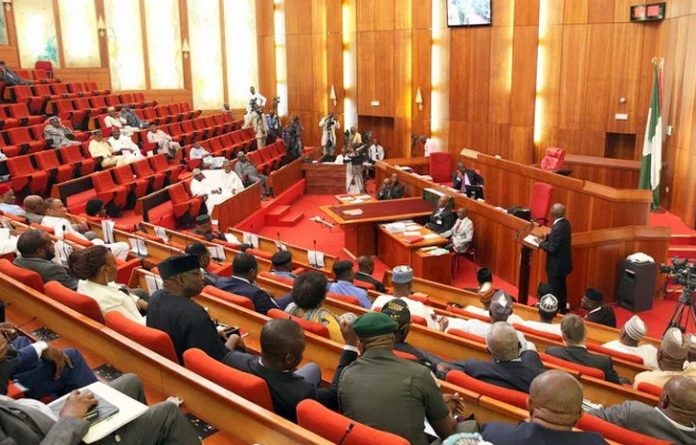 Mmebers of the Nigerian senate this morning moved a motion for the impeachment of President Buhari. According to Premium Times, the senators moved the motion because the President did not seek the National Assembly’s approval before the withdrawal of the $496 million used for the purchase of aircraft from the United States.
Section 143 of the Nigerian constitution provides for the removal of the president from office.
Senator Matthew Uroghide who moved the motion for the impeachment, said President Buhari’s move was a violation of the Constitution and thus, he should face the consequences. He prayed the Senate to invoke Section 143 to start the impeachment process of the President.
Seconding the motion, Senator Chukwuka Utazi spoke in support of the move.
“This is an impeachable offence,” an obviously angry Senator Utazi, said.
On Wednesday, Senate President, Bukola Saraki, read a letter from President Buhari informing the house that the money had been withdrawn and paid to the United States for the 12 Super Tucano aircraft, ahead of legislative approval. The planes will be delivered in 2020.

“Recently, approval was granted by the United States government but with a deadline, within which part payment must be made otherwise the contract relapses. In the expectation that the National Assembly will have no objection to the purchase of these highly specialised aircraft, which is critical to national security, I granted anticipatory approval for the release of $496,374,470. This was paid directly into the treasury of the United States government. I am therefore writing seeking approval of the Senate for the sum of $496,374,470 (equivalent to N151,394, 421,035) to be included in the 2018 Appropriation Bill which the National Assembly is currently finalising. The balance of the requirement for critical operational equipment is still being collated from the different security services and will be presented in the form of a supplementary appropriation bill in due cause.”

Most of the senators argue that this is a breach of the constitution and that President Buhari must face the consequence.
More Details later… 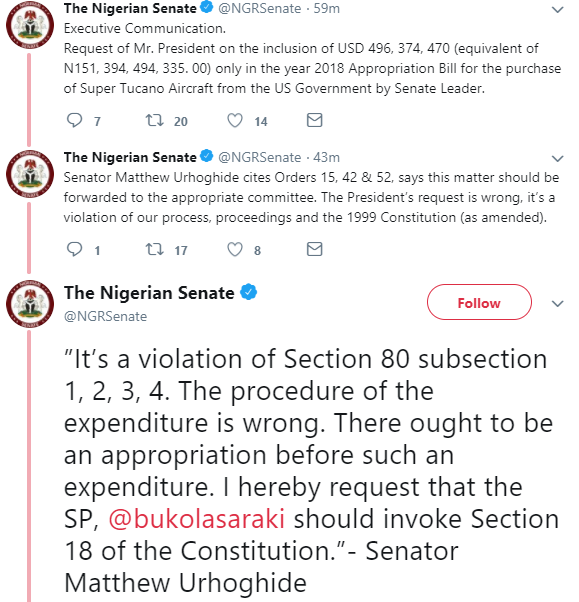