EFCC arrests PDP senator, Peter Nwaoboshi, who is on the looters list

EFCC arrests PDP senator, Peter Nwaoboshi, who is on the looters list 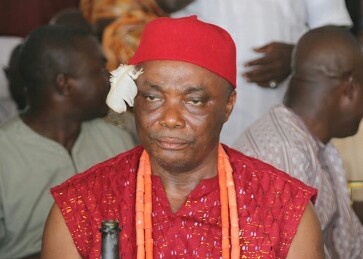 Operatives of the Economic and Financial Crimes Commission (EFCC), have arrested the Senator representing Delta North senatorial district in the National Assembly, Peter Nwaoboshi, over issues bothering on corruption and fraudulent contracts.
According to a report by SaharaReporters, Nwaoboshi was arrested by the anti corruption agency last week on allegations he fraudulently purchased a building owned by Delta State, “Guinea House” in Lagos state.‎ Nwaoboshi is amongst the names in the Federal government’s looters list.
A source in EFCC who spoke on condition of anonymity said the senator had been invited for questioning but had always turned down the invitations.

“Yes we arrested Senator Nwaoboshi few days ago based on series of corrupt cases hanging on his neck. On several occasions he has turned down our invitation extended to him. He is under our custody right now but I won’t give you further details because he will soon be charged to court. But I advise you to also get across to our spokesman, Mr Wilson Uwujaren for further clarifications.”the source said

It is being alleged that Nwaoboshi’s arrest was orchestrated by the Delta state governor, Ifeanyi Okowa, who doesn’t approve of the senator’s bid to return to the senate. Nwaoboshi is also a very close ally of the former state governor, James Ibori.
Share this...

Dwayne 'The Rock' Johnson and his partner Lauren Hashian welcome their second child, a baby girl

Update: All Dino Melaye's police ordelies have been withdrawn