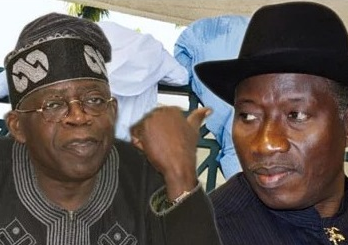 The National leader of the All Progressives Congress (APC), Bola Tinubu,  says former president Goodluck Jonathan’s administration is the worst culprit when analysing past administrations that stole from the nation’s treasury.
The former Lagos state governor said this at the 35th annual Aminu Kano memorial symposium, held in Kano yesterday April 17th and was represented by the Oyo state governor, Abiola Ajimobi.
Accoridng to him, there is a deficit in our infrastructural development because of the billions of Dollars and trillions of Naira stolen from by the Jonathan administration and other PDP led governments.
Tinubu added that in the last three years, the Buhari-led government has been labouring hard to clean the rot created in 16 years by the past governments.

“When someone can do for you in three years what another did not even try in 16 years, any person with an open eye can see the difference between giver and taker, between friend and thief. The APC government may, at times, be imperfect in fulfilling the spirit of Aminu Kano but we are far from the PDP, which has perfected the malign craft of giving selfish ambition primacy over the public good. Consequently, the Buhari government has spent inordinate time cleaning the rot and plugging the holes in the corrupt system they institutionalised as their strategic policy and national direction. The APC has been working to steer our national ship from this awful direction in order that we may bring the people and their welfare into safe harbour.” he said

Continuing, the party leader said ”The stolen money would have acquired the infrastructure and implement the programmes that bring greater development and economic justice to all. Instead, the select few ate more than their bellies could contain. Distorting the cause of justice and hijacking the means of national welfare. They wildly enriched themselves and left the average Nigerian to dine on the passing wind.”
Share this...