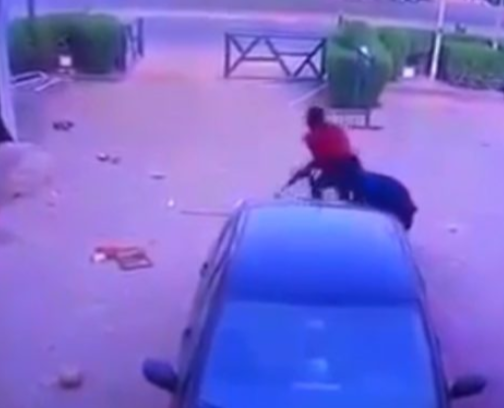 The police have trailed and arrested in Lagos two robbery suspects who took part in the deadly attack on five banks and a police station in Offa on 5 April, killing as many as 17 people.
Jimoh Moshood, the Police Police PRO identified the two suspects as 39 year-old Alexander Reuben and 28 year-old Jimoh Isa.They were all arrested on 11 April. They were among the 12 suspects so far arrested by the police.
Another suspect Adetoyese Muftau, 23 was picked up in Ibadan, while three other suspects were arrested in Ilorin, capital of Kwara state. The three were identified as 18 year-old Aminu Ibrahim, 23 year-old Richard Buba Terry and 25 year-old Peter Jafar Kuunfa.
Jimoh also said in the update released yesterday that six suspects were arrested in Offa, where the dastardly crime was staged. Two out of the suspects nabbed in Offa were caught with the SIM cards and phones of some of the victims of the robbery violence. They were identified as Azeez Salawudeen, who is aged 20 and Adewale Popoola, who is 22 years old.
Police gave the names of the four other suspects arrested in Offa as 29 year-old Adegoke Shogo, Kayode Opadokun a 35 year-old man, Kazeem Abdulrasheed, 36 and Azeez Abdullahi, who is 27.
Police said they recovered from the three suspects picked in Ilorin a Beretta pistol and 14 bullets.  In all the police have collected from the suspects, two Beretta pistols, 20 bullets, four Phones and SIM cards belonging to victims, some of whom were killed during the attack.
According to the police, nine of the suspects now in custody took part in the robbery and attack on a police station in the town. They were arrested by the high powered police investigation team, who worked in synergy with the State Criminal Investigation team. ”The Police teams engaged in massive raids of identified criminal spots and flashpoints, stop and search operations, visibility and confidence building patrols, intelligence gathering which led to the arrest of the suspects.
Some of the arrest also involved serious exchange of gun fire between the Police and the suspects in their various hideouts”, Moshood said. The police gave the details of some of the suspects arrested and their confessions: *Adegoke Shogo, 29 years, native of Offa Kwara State. He was arrested in Offa after the bank robbery and the attack on the Police Station. He is a drug baron and also an Indian Hemp dealer in Offa Kwara State.
According to intelligence gathered from cultivated and reliable informant, he is alleged to be one of the sponsors of the robbery attack and the Police Station in Offa. He has made useful statements to the roles he played in the armed robbery.  * Kayode Opadokun 35years, also a native of Offa Kwara State, He was found out to have been released from Prison three months ago after serving only eight months of his sentence years for armed robbery.
He is a notorious robber and confirmed gang member of the Offa Bank Robbers.
Share this...

Who will save some Nigerians from Intellectual laziness - Femi Adesina