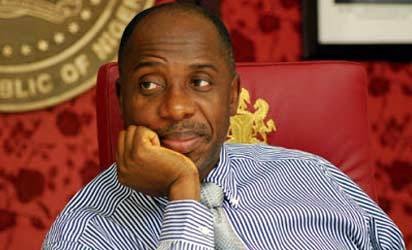 Minister of Transport, Rotimi Amaechi, says his monthly pay as a minister is N950, 000 out of which he also pays his aides. The former Rivers state governor turned Minister, disclosed this when he spoke at the presentation of a book titled, ‘Dignity in Service,’ authored by the late Dr. Matthew Mbu, a former Minister of Foreign Affairs, yesterday April 10th.

“A minister earns only N950, 000 a month. Out of this money, N350, 000 is for accommodation so there is no more money given to you. The remaining N600, 000 includes payment for your staff, personal assistants and all that” he said

”Nigerians like going to parties. That is one benefit of this government. We now assess our wealth and value money. Before, once you get money from the illegal means, we hold parties. There are very few parties these days because there is no more money to hold such parties.  There are no ‘owambe’ anymore because there is very little money to hold ‘owambe.’ The reason is that the ‘owambe’ money used to come from the government and there is no money in the government to do such.”

I have made over N100m from kidnapping - notorious kidnapper, Muritala Umaru

See Lovely photo of BBNaija housemate, TeddyA and his mum