“i was deceived to joining them to see president Buhari” Abuja pastor, who accompany Arewa pastors to visit Buhari says

“i was deceived to joining them to see president Buhari” Abuja pastor, who accompany Arewa pastors to visit Buhari says 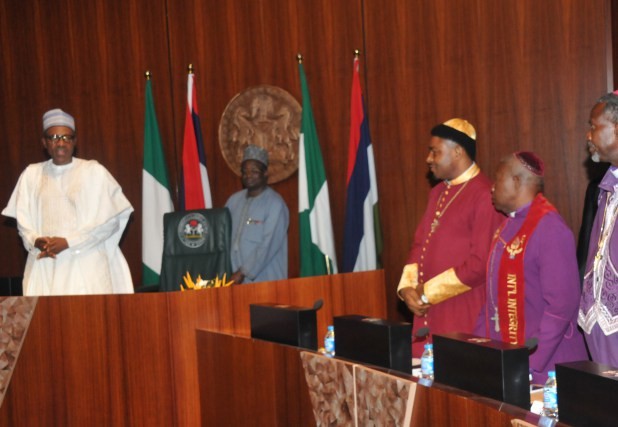 One of the Arewa pastors who visited President Buhari at the presidential villa in Abuja last week, says he was deceived into joining the delegation.
In an interview with The Cable, the Abuja based clergyman, Henry Sado, said he was deceived to join the Arewa Pastors Non-Denominational Initiative for Peace in Nigeria (APPIN) who during their visit, endorsed President Buhari for a second term and promised to expose those working against him within the Christain fold.
Their visit sparked controversy on social media with claims that the pastors went on a political pilgrimage to visit President Buhari. The pastors allegedly failed to speak on the abducted Dapchi school girl, Leah Sharibu.
In an attempt to clear his name, Sado who is a pastor at the Abuja branch of Church of Eternal Life, gives an insight into how he was invited as part of the delegation.

“Bishop JRA (John Richard Abu) called me on Wednesday, April 5, 2018, to be part of his team to Aso Rock on Thursday, April 6. He told me about his closeness to a former president of CAN. He also said he had spoken with the chairman of Pentecostal Bishops in the 19 northern states and FCT who is also the founder of Dominion Chapel International Churches, Archbishop Daniels John Praise; hence I should please follow him.
“I asked him the purpose of the visit to the Villa and he said like other Christian groups that have been visiting the villa, he wants to go and present burning issues to President Buhari, including the case of Leah Sharibu, the female student of Government Science Technical College, Dapchi, Yobe state, who is still being held captive by Boko Haram insurgents and a prayer conference. I am not privy to the speech he presented.

I met him for the first time on Thursday, April 5, 2018, in fact, I had to call him to identify him in the midst of others. On getting to the villa, the Chaplain of Aso Villa (Seyi Malomo) was surprised to see him and he asked of Archbishop Daniels John Praise and Rev. Yakubu Pam (chairman of CAN in 19 northern states and FCT), two very prominent northern Christian leaders, and he (Abu) said they were not on his team. There and then, I suspected there are issues, I had been conscripted through deception.
“I was asked to stand in for FCT since the Arewa pastors are supposed to come from the 19 northern states and FCT. I am a Pastor and have lived in Abuja for the past 17 years, by God’s grace. Some Christian leaders have been to our church before. I was former national chairman of YOWICAN (Youth Wing of CAN). I have never turned my back against the Christian community before, my records with the fathers and God speaks for me.”

No woman deserves to be humiliated like this - Nina's publicist says, miracle betrayed her trust