#BBNaija housemate, Nina weeps as she calls off her relationship with Miracle (see Video)

#BBNaija housemate, Nina weeps as she calls off her relationship with Miracle (see Video) 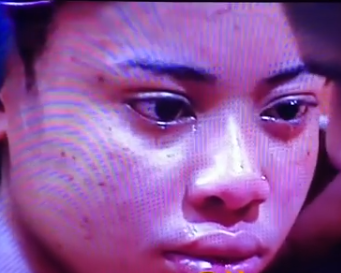 #BBNaija housemate, Nina, has called off her ”relationship” with her in house lover, Miracle.
Their lover affair began having problems when during the live eviction show, Nina found it difficult to define her relationship with Miracle. Ebuka, the show host, had asked her who Miracle was to her. After stuttering for a minute, Nina said Miracle was her best friend and her everything. When asked who her boyfriend outside the house, Collins, was to her, Nina said Collins was just her boyfriend.
Nina and Miracle had a discussion in the house Tuesday, where Miracle expressed his displeasure to Nina on how she refers to him as just her friend. According to him, people will begin to see her as someone who is playing a game using him. This got Nina really upset and sad. During her diary session, she asked Big Brother to ensure Ebuka ask her about her relationsship with Miracle so she can clear the air once and for all.
However things got heated last night between them. While she was speaking with Tobi, Nina said she is done with Mina and doesn’t want to have anything to do with him again.
Watch a video from the scene below
Share this...