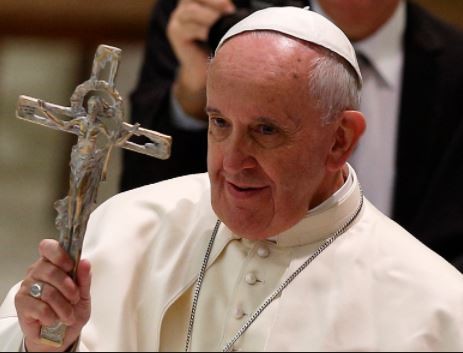 Pope Francis has said, use of the religious symbol `the Crucifix’ (cross) as a fashion accessory contributes to abuse of the religious object.
In a speech at St Peter’s Square in the Vatican, Pope Francis said that the religious symbol should be “contemplated and understood”, and “not be abused”. Highlighting the religious meaning of the cross, he said: “the crucifix is not an ornamental object or a clothing accessory which is sometimes abused, but a religious sign to be contemplated and understood. The image of Jesus crucified reveals the mystery of the death of the Son as the supreme act of love, the source of life and salvation for humanity of all times. How do I look at the crucifix? Like a work of art, to see if it’s beautiful or not beautiful? Or do I look inside, within the wounds of Jesus up to his heart? I look at the mystery of God annihilated to death, like a slave, like a criminal.”
His comments mirror those made by the Archbishop of Canterbury in 2013, within the foreword of his first Lent book. Speaking about how the crucifix is used, Most Revd Justin Welby wrote: “For those early Christians it was a badge of shame. Today it is more commonly seen as a symbol of beauty to hang around your neck. As a friend of mine used to say, ‘you might as well hang a tiny golden gallows or an electric chair around your neck’.”
Share this...