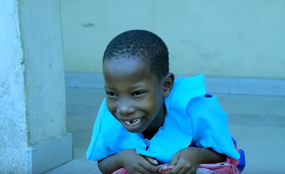 Senate President, Bukola Saraki, yesterday invited 9-year-old popular Nigerian comedienne, Emmanuella Samuel aka Emmanuella to the senate after landing a role in an upcoming Disney Hollywood film.
Emmanuela had made the big announcement of her feature in the hollywood movie via herInstagram handle over the weekend.
She wrote ”Thanks @disneystudios God bless everyone whose support has added to bringing us here. I never dreamed of being here so soon. I miss Success. I love you all”
Emmanuella has over the years gathered various awards for her sterling perfomance as a comedian.
In 2016, she was awarded the best new comedienne and princess of comedy at the Afro-Australia Music and Movie Awards in Australia. She is also the first African to have one million subscribers on her Youtube comedy channel.
Saraki via his Facebook page, last night invited her over to trhe senate while congratulating her. He wrote
”Congratulations Emmanuella! Make sure you make them laugh over there.
Your story is an inspiration. Come by the Nigerian Senate sometime, let’s discuss how we can develop the potential of our young talents in the creative industry.
CC: Mark Angel”
Emmanuella, an indigene of Imo state, was born on 22nd of July 2008 in Port Harcourt .Her popularity soared right after she starred in the Mark Angel Comedy skit, “This is Not My Real Face Oh”.
Share this...

Here's how Nigerians voted for the #BBNaija housemates last week