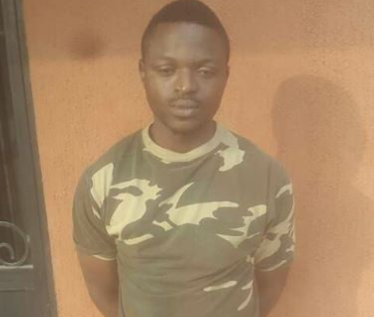 Troops of 174 Battalion, 9 Brigade Nigerian Army, has arrested one Mr. Pascal Philip who goes about impersonating soldiers and molesting hapless and unsuspecting civilians at Isawo area of Ikorodu, Lagos State.
The Suspect who was arrested while molesting innocent civilians in Isawo falsely claimed to be a personnel of 174 Battalion, Nigerian Army. He was arrested dressed in camouflage T-shirt molesting, extorting and intimidating law abiding civilians in the area. The suspect is currently under going further interrogation and would soon be handed over to the police for further investigation and prosecution.
Share this...

Watch the Live Broadcast of the mass Burial of 73 people killed by the Fulani Herdsmen.