Governor Rochas Okorocha’s first son, Afamefula Hospitalized in the Uk, after he slumped during the christmas Holiday

Governor Rochas Okorocha’s first son, Afamefula Hospitalized in the Uk, after he slumped during the christmas Holiday 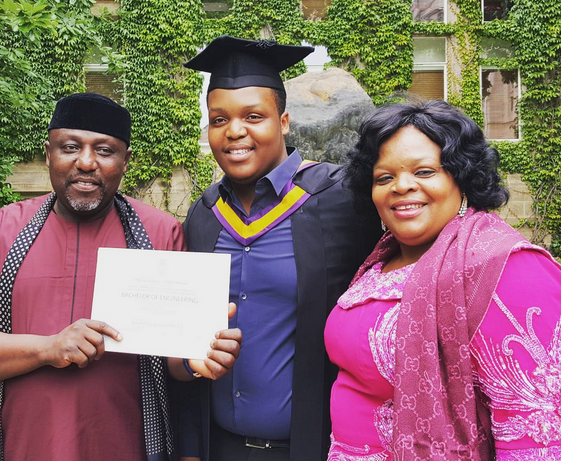 The first son of Imo State Governor, Rochas Okorocha, Afamefula, is reportedly on admission in an undisclosed hospital in London for a yet-to-be disclosed illness. The Sun reports that Afam was flown to London for treatment after he allegedly slumped during Christmas week.
The Minister of Science and Technology, Dr. Ogbonnaya Onu revealed this while explaining the absence of Governor Okorocha during the South East zonal meeting of the All Progressives Congress (APC) chieftains in Ebonyi State on Sundat December 31st.
“I had informed Governor Okorocha of this meeting and he had promised to be here. The governor however, called me back days after our conversation to explain that his son had taken ill and he will be taking him to London for treatment, and, as such, would not be able to attend the meeting. We pray that his son recovers quickly.” he said
A close source to the governor said Aham had suddenly taken ill and was immediately rushed to London for treatment, accompanied by the governor and his wife, Nkechi.
The source confirmed the conspicuous absence of Aham at Sunday’s thanksgiving by the first family of the state at the Holy Trinity Catholic Church, Ogboko. The source also said news from London indicated that Aham was responding to treatment, hence, the thanksgiving on Sunday.
President Buhari’s only son, Yusuf, is also being treated in an Abuja-based hospital after he was involved in a ghastly bike accident on December 26th.
Share this...

"If you don't like what i post, save yourself the Energy and unfollow, Roman Goddess says, as she display her massive Boobs