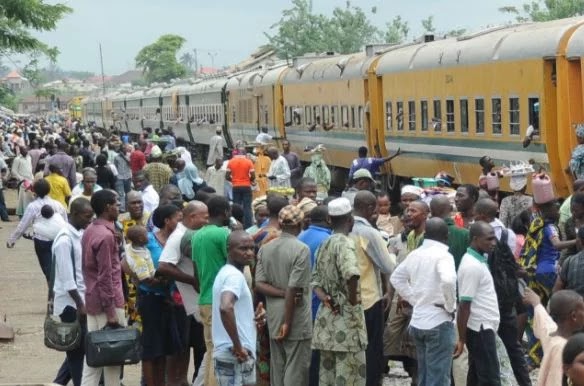 Osun state indigenes resident in Lagos and its environs on Saturday, enjoyed a free train ride to Osogbo to celebrate Christmas, courtesy of Governor Rauf Aregbesola.
At the Iddo Railway Terminus, all the train couches were filled to capacity.  Some of the passengers lauded Governor Rauf Aregbesola for providing the gesture at a time the nation was witnessing acute petrol scarcity.  The free train ride was organised by Aregbesola administration in collaboration with the management of the Nigeria Railway Corporation (NRC).  The arrangement is to convey Osun indigenes in Lagos to Osogbo and other towns along the rail line during festive periods.
Aregbesola began the gesture since the inception of his administration seven years ago.  The passengers said that it was an opportunity for them to travel at this period when petrol scarcity was biting hard.  Mr Sanmi Babalola, a civil servant, lauded the gesture, saying that it would afford him the opportunity to travel home for Christmas.  Babalola said that the current fuel scarcity had discouraged many people from travelling, as transport fare had increased astronomically.
Also, Mrs Yemisi Aduloju, a trader, thanked the governor for the free ride provided for the people of the state and other Nigerians.  Aduloju added that the service would relieve the hardship, which passengers would face while travelling to visit their families for the yuletide.  She said she was discouraged on getting to the motor park on Friday only to know that transport fare had skyrocketed beyond what she could afford.
Share this...

Pastor T.B Joshua, reveals the cause of world poverty