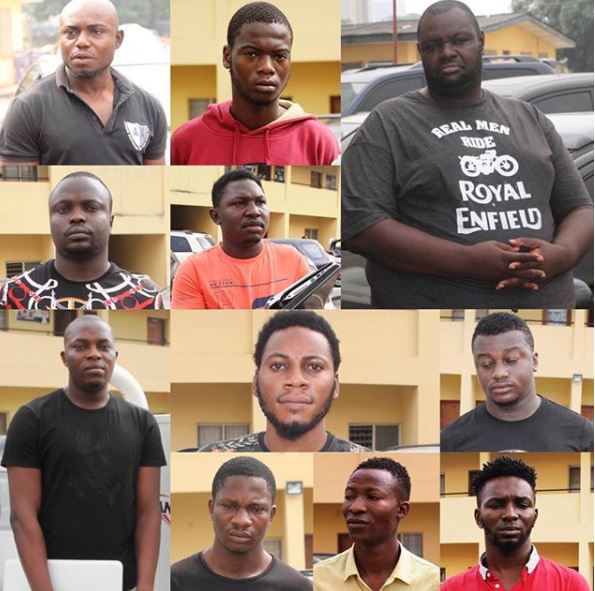 EFCC, Lagos zonal office, has arrested 13 suspected internet fraudsters for conspiracy, possession of fraudulent documents and obtaining money under false pretense. .
The suspects are- Badejo Tobi, Abiola Dimeji, Anthony Godwin, Osoba Adeboye, Adeleken Abiodun, Awokoya Oriyomi Yusuf, Oyatayo Ismail; Coffie Meschark, Sylvester Amaddin, Olawale Farouk, Adeniran Tolani, Taiwo Michael, and Oyekanmi Ayodeji. .
They were arrested on Saturday, December 16, 2017, in some parts of Lagos and Ogun States, following intelligence report received by the Commission about their activities. The suspects allegedly confessed to being involved in phishing, love scam, forgery, spoofing and business email compromise, among other offenses. .
Phishing is an attempt to obtain sensitive information such as usernames, passwords, and credit card details (and money), often for malicious reasons, by disguising as a trustworthy entity in an electronic communication. Spoofing, on the other hand, is a type of scam where an intruder attempts to gain unauthorized access to a user’s system or information by pretending to be the user.
Some of the suspects, who live flamboyantly without any known sources of income, were said to have bought houses and exotic cars from the proceeds of their criminal activities. They were allegedly found to be in possession of forged contract papers of multinational oil and gas companies, banks’ instruments and forged data page of international passports of foreign nationals, among other documents.
Other items recovered from the suspects included laptops, flash drives, modems, one Range Rover SUV, one Toyota Highlander, two Toyota Corollas, and one Toyota Camry. They will soon be charged to court as soon as investigations are concluded.
Share this...