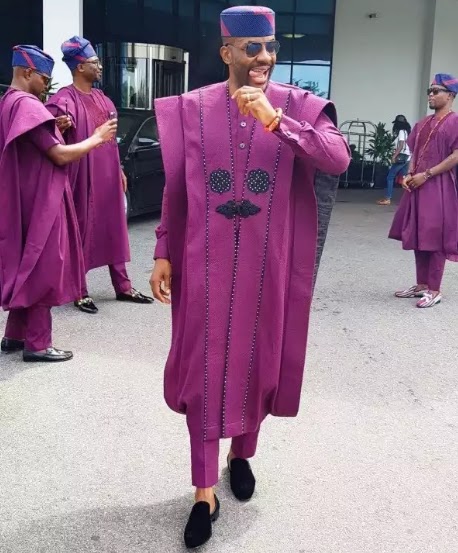 In a post shared on his IG page, notable male designer, Seyi Vodi, appealed to Nigerian tailors and ‘A-List’ designers not to reproduce the famous Agbada media personality, Ebuka Obi-Uchendu, wore to Banky and Adesua’s wedding. Seyi Vodi says he has instructed his tailors not to reproduce the Agbada for anyone. According to him, himself and other Nigerian tailors must learn to respect the creativity of others.
‘Sunday 19th November 2017 was a celebrity wedding between @BankyW and @adesuaetomi. One thing struck almost everyone, the Iconic Agbada designed for @Ebuka by the celebrated Fashion designer @ugomonye.official .
On Monday the following day, I passed an internal memo that none of our outlets should agree to reproduce it for any client out of respect for this piece of art. On Wednesday, I put a call to Ugomonye through a mutual client and friend @karowenu to congratulate him and further encourage him. I want to equally encourage the ‘A’ list fashion designers to respect the right to someone’s creation, especially this mind-blowing piece of art. I understand we have many upcoming designers and tailors that may want to try it. Even though I have said it before that, “the best compliment anyone can give you is to copy you”, but this Agbada is an exception. Someone may ask, “What is so Special about this?” So many things, I will answer. This is called thinking-outside-the-box. Just like so many Nigerians have created cars and products that have gone unnoticed. This one is noticed and recognition should be given to such creation by our trade and commerce ministry, Bank of Industry etc. for support, development, and preservation’.

After being jobless for months, Frank Edoho lands a new role as the host of another TV game show

Actress: Regina Daniels claims, she has arrested the fake producer Richy Adams for impersonation and Amanda Chisom is wanted by the police. (Read Full details)