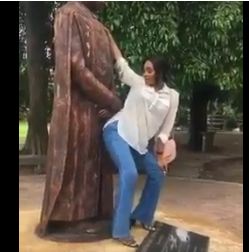 She got rusticated from Unilag for 4 semesters for this. Thoughts? pic.twitter.com/eUFHhcSx63

Statue are not just erected for fun, It’s to immortalize some great people. Dancing with the statue to me is disrespectful.

She deserves the punishment. We need to start to respect people we immortalize by erecting their statue.

So a statue is now more important than a person’s future? See as your face even look like statue. Olodo!

She deserves it!  That’s disrespectful in an academic environment, when will our youths Start behaving and thinking like leaders of Tomorrow

It was not a disrespectful act. Many people take funny pics with that same statue and nothing ever happened. deserved a subtle  reprimand.

Very disrespectful of her. Lots of men out there looking for a lap dance, here she is giving it to a statue. Village people at work. SMH.

it is not what she did, but who or what she did it to. That is Sofoluwe our beloved V.C who died in office 😢.

There isnt a SINGLE NIGERIAN FEDERAL UNIVERSITY that consciously develops a man’s character. It’s after they show you pepper, you learn.

Not that sef to me.
That image is there for d fact that whosoever that is, the respect that person so much to have that image there as legnd

Peter Okoye of Psquare shows off is designed MR.P pendant.

See viral photos of Dooshima Kususgh a Benue bride, who stopped her weeding to quickly write her exams, at the Benue State University