UK based security Expert says: ” Nnamdi Kanu, should be treated like a terrorist”

UK based security Expert says: ” Nnamdi Kanu, should be treated like a terrorist” 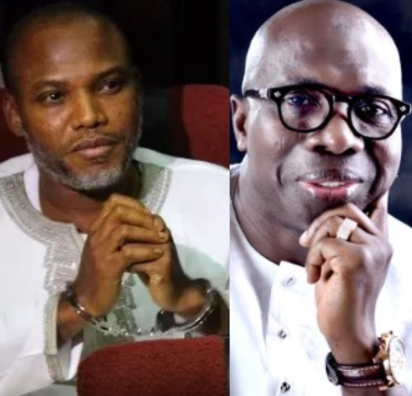 UK based security expert, Abayomi Mumuni says Nnamdi Kanu the leader of the Indigenous People of Biafra (IPOB), should be treated like a terrorist.
According to him, he said
‘I did mention this few months ago. I warned against provocative utterances during the IPOB clash with the Arewa Youths, but the Igbo leaders refused to adhere to my warning. They maintained criminal silence. Mr President has given enough room for both Governors and the elders of the affected states to call the agitators to order but they failed to do so, simply because they are cowards. Many of them are also corrupt elements without self-pride’.
He added;  ‘so, why blame the Federal Government for deploying the Nigerian Army to Aba and Umuahia when the State Governor allows the criminals to take laws into their hands?’.
‘The Operation Python Dance II has no negative implication. I do not see any negative consequence to calling the military to take charge. The act needed a drastic approach to avert reoccurrences, like guerrilla warfare. Currently, Boko Haram has been dragged to a buffer zone where they operate in isolation, and Nigerians should not allow another terrorist group to spring up from nowhere. They should be crippled immediately. It is my belief that military intervention will bring normalcy to the affected regions. The Federal Government, the South East Governors and the elders of the region should thereafter engage in peaceful dialogue to bring lasting peace to the region’ he concluded.
Share this...

Watch the heart touching story of the Lady who was almost killed by a movie producer, because of a role in a movie