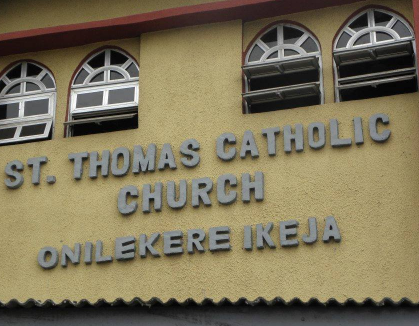 Suspected assassins disguising as parishioners this morning shot the parish priest at St Thomas Catholic church Onilekere cement B/S Ikeja. A statement released by the Lagos state police public relations officer, Olarinde Famous-Cole, says the hoodlums posing as parishioners, attended the early morning mass in the church that was conducted by the victim.
Shortly after the service, they requested to have a dialogue with Rev Father Daniel Nwankwo who granted them audience outside the church auditorium and for reasons yet unknown, one of the hoodlums brought out a locally made pistol and shot at the Rev Father.
The Rev Father raised an alarm while the hoodlums fled the area and scaled through the fence towards an adjoining canal. The Rev Father was immediately taken to LASUTH for medical attention where he is currently being treated and is under stable conditions.
The state commissioner of police, Imohimi Edgal, has visited the scene and spoken with a witness who confirmed that Three (3) assailant of Igbo background who were not known to be members of the church, were seen having a conversation with the Rev Father before he was shot at.
The Commissioner of Police has visited the Rev Father Daniel Nwankwo and spoke directly with him and confirmed that the Rev Father is been given adequate medical care and he is recuperating fast. A crack team of detectives and operational officers from the police command have been dispatched to the scene and area leading to the canal where an eye witness confirmed the hoodlums ran towards.
Five (5) suspects have been arrested in connection with the attack. They will be diligently interrogated for vital information to aid police investigation. The Commissioner of police Lagos state is advising lagosians to be viligant and security conscious at  this time and must identify and report any strange faces & suspicious movement to the police.
He has also ordered the deployment of static police guard on 24hrs bases in all churches and mosque across the state instead of only on Fridays & Sundays like it as been done in the past
Imohimi says the hoodlums that made an attempt on the Rev Father will be arrested and brought to book
Share this...

Video: Husband who is a body builder, Champ strips down to his briefs to dance for his wife on weeding day.